Danish architect Hans J. Wegner is considered a pioneer as furniture designer in the twentieth century.

Hans J. Wegner (1914-2007) is considered one of the most creative, innovative Danish furniture designers,  people offten refer to him as the master of the chair.  Roughly 500 of his furniture designs have been in production the last decades, about a 100 are still in production today, many of them are considered as masterpieces. His classic Wishbone Chair has been in non-stop production since 1950 and is perhaps his most well-known design.

During his life, Wegner has designed a collection of phenomenal furniture items, including inventive tables. Still his place in design history rests above all on his broad range of chairs, each of them remarkably original and completely natural in appearance.

Wegner was part of a astonishing generation that created what is known today as  ‘the Golden Age’ of modern Danish design. “Many foreigners have asked me how we created the Danish style, and I’ve answered that it was a continuous process of purification and of simplification, to cut down to the simplest possible design of four legs, a seat, and a combined back- and armrest.”

Wegner was born in 1914 in Tønder, a town in southern Denmark as the son of a cobbler. He started at the age of 14 as an apprentice with Danish master cabinetmaker H. F. Stahlberg. He moved to Copenhagen to be a student at the School of Arts and Crafts from 1936 to 1938  before starting his journey as a furniture designer.

In 1938 Wegner got approached by Arne Jacobsen and Erik Møller to collaborate and design furniture for the new Aarhus City Hall. During the same time period Wegner started collaborating with master cabinetmaker Johannes Hansen, which was a driving force in bringing new furniture designs to the Danish people at the Copenhagen Cabinetmakers’ Guild Exhibitions.

Wegner’s background as a cabinetmaker gave him a deeper understanding of how to incorporate exacting joinery techniques with exquisite form. The essence of Wegner’s legacy is targeting the inner soul of furniture pieces through a simple and functional exterior. His aesthetic was also based on a profound respect for wood and its characteristics and interest in other natural materials that facillitated him to bring an organic, natural softness to formalistic minimalism.

In 1943 Wegner started his own design studio where he created the Wishbone Chair, which has been in production ever since. He received multiple design awards,such as the the Grand Prix of the Milan Triennale in 1951, the Royal Danish Academy of Fine Arts’ and  the 8th International Design Award in 1997.  Besides a lot of awards you can also spot his works in the Museum of Modern Art in New York and Design museum Danmark in Copenhagen. Hans J. Wegner died in Denmark in January 2007, aged 92. 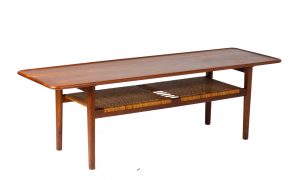 Johannes Joseph Maria Hoogervorst born in Alkmaar The Netherlands on 14th of April.

Martine Le Forestier is a French designer born September 3th 1945.
She studied in Paris at the ENS AMAA, National School of Applied Arts and Crafts. In 1969 she won a price with her design of this lamp.

was born in Varedo in 1911. Son of Gaetano, a well-known furniture maker in his “Atelier di Varedo”. In the family business, 16-year-old Osvaldo receives the first training

Danish architect Hans J. Wegner is considered a pioneer as furniture designer in the twentieth century.

Friso Kramer thinks in large numbers, in mass production. He was very curious, but he didn’t think of anything just because he liked it, there was always a good reason. he didn’t want to compromise. The more impossible the assignment, the better he liked it. “When someone comes up with a problem, it inspires me endlessly to come to a solution,” his own words.

born in milan on 21/08/1939.
He graduated with a thesis in Industrial Design, architecture at the Milan Polytechnic in 1967.

Fill in your email I'll keep you updated about the latest finds.